As I’m gearing up to self-publish with both e-book and paperback options, the news breaks today that Stephen King has made the decision to not provide an e-book option for his upcoming book Joyland. In today’s digital age where authors like Neil Gaiman are pushing for change in order to keep up rather than to go extinct, it’s either a bold move or a big financial mistake.

The decision to not include an e-book at all for Joyland makes readers have to purchase the physical book, which is King’s ultimate motive. In a move that shows support for brick-and-mortar stores, the book is available for pre-order as a paperback on Amazon, but a reader can purchase a limited hardback edition through Titan Books. So that may change things slightly as he is not treating the release in the traditional way. Now he’s making the hardback a limited commodity and not making readers wait for a paperback release, both smart decisions if he’s going to challenge the digital publishing world.

King’s physical-book-only choice supports the side of traditional publishing that other authors like James Patterson bemoan. In Patterson’s Future of Books ad, he made several claims that subversively takes shots at Amazon and other self-publishing platforms. 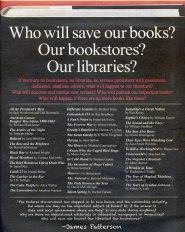 Bookstores like Barnes & Noble are taking huge financial hits and not being able to compete. Independent bookstores live with the threat of closing because of the rise of e-books. So maybe bookstores need an author to stand up for them as their physical-book-wielding hero?

Only the release itself will show whether or not a book release model like King’s will show success or failure. I will speculate that perhaps he will treat the e-book for Joyland much like paperback releases were treated, so that it will be available at a later date making those who are hungry to read the book purchase the physical book first. But King risks a larger release day by blocking a digital release of the book.

It should be noted that King isn’t necessarily following this physical-book-only model for all of his books. According to the LA Times article, the prequel to The Shining titled Doctor Sleep may have an e-book attached to it since an excerpt of the prequel will be included in a new e-book version of The Shining. But as one of the first major authors to take this Don-Quixote step against digital publishing, a lot of people in the industry will be watching what happens. Hopefully, it won’t be the readers who lose out in the whole campaign.

The constant changing landscape of publishing, both traditional and self, has become its own soap opera. Authors are taking a stand on either side of the demarcation line. Even an author like Gaiman who calls for change and supports what e-readers and e-books can provide for readers still doesn’t offer a solution. His suggestion that the way authors get their money may be in trying different things including “[a] world in which buying a physical book automatically gives you e-books and audiobooks.” King is definitely trying something different.

I support bookstores, and would be very sad if they all went away. At the same time, I would rather carry King’s large tomes like Under The Dome in my Kindle rather than as the hardback. King is addressing the larger problem of what to do with books, but it’s too soon to determine whether or not he’s right or will be successful.

As an indie author, I wish I could support independent bookstores by self-publishing through them or promoting readers to purchase through them, but that’s not really an option as of right now. It would be better if Amazon’s self-publishing model was supported by industry professionals rather than strictly business employees who see the books independently published as only a product rather than the special pieces they are. It would be great if popular authors like King wouldn’t stand against the book format that represents so many indie authors. I will keep chanting my question until someone finds a way to bridge over line drawn in the sand – can’t we all just get along?